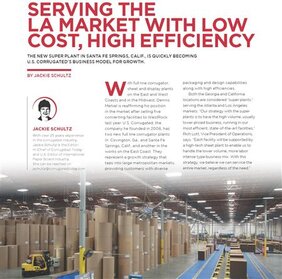 With full line corrugator, sheet and display plants on the East and West Coasts and in the Midwest, Dennis Mehiel is reaffirming his position in the market after selling five converting facilities to WestRock last year. U.S. Corrugated, the company he founded in 2006, has two new full line corrugator plants in Covington, Ga., and Santa Fe Springs, Calif., and another in the works on the East Coast. They represent a growth strategy that taps into large metropolitan markets, providing customers with diverse packaging and design capabilities along with high efficiencies. Both the Georgia and California locations are considered “super plants,” serving the Atlanta and Los Angeles markets.
“Our strategy with the super plants is to have the high volume, usually lower priced business, running in our most efficient, state-of-the-art facilities,” Rich Lott, Vice President of Operations, says. “Each facility will be supported by a high-tech sheet plant to enable us to handle the lower volume, more labor intense type business mix. With this strategy, we believe we can service the entire market, regardless of the need.”

West Coast Impact
The 230,000-sq-ft Santa Fe Springs facility went into full production in 2015. Located in the Gateway Cities region of Southeast Los Angeles, the plant serves a variety of industries including e-commerce, food and beverage and agriculture. “We have a significant market presence at this point. Two and a half years ago we were in an empty building starting this project. We are currently running over 100 million sq ft per month, so we have definitely made an impact in the LA market.”

The plant has three full converting lines – an Ibis and Falcon flexo folder-gluer from Isowa and an Apstar rotary diecutter from Haire Machinery. The Apstar is a full pizza box diecut line. The 110-inch Fosber corrugator runs primarily B-, C- and E-flute and doublewall. It also has the ability to run preprint and sesame tape. The corrugator runs two shifts (converting runs three shifts) and averages 20-25 paper changes a shift. Average run speed is 50,000 lineal ft per hour. Lott says the technology on the corrugator was well-suited to the needs of the Santa Fe Springs plant. The machine has 2 SMART 400 Singlefacers and 5 Link M3 roll stand/splicers. The Link M3 system can change paper rolls in less than 120 seconds. The roll stands’ automated operation and footprint was especially beneficial. “That allowed us to get into a building that we probably would not have been able to use otherwise,” he says. “That saved us 30 ft, which with the 230,000 sq ft footprint, was significant.”

Lawrence Jenick, Vice President of Manufacturing, says another advantage of the M3 roll stands is that the rolls are discharged to the operator side of the machine so they can be picked up and loaded on the same side. “It reduces the manpower needed on the wet end because you can stage the rolls three deep for coming into the splicers and those rolls automatically chuck and position themselves so all you have to do is prep the roll and put the splicing tape on,” he says.

The corrugator has a Master 400 cutoff knife that is rated at 1250 ft per minute with a 1000 ft per minute divert section for splices and AOC waste.“The diverter coming out of the knife automatically ejects the splice during a run at full speed so you’re not relying on your stacker operator to grab that splice,”Jenick says. Also, if you want to check a sheet you can divert one or a few sheets to do quality checks so you don’t have to grab a sheet off the stack. It’s a very user-friendly machine. We are fortunate to have such great crews on the machine. They have been phenomenal. They run the machine at capable run speed all the time.”

Additional features on the corrugator include: a Thermostack 43-inch triple preheater; a Crest double glue machine; 18-plate Express doublefacer; a rotary shear 400 capable of 1000 ft per minute; Constant system no-gap order changes; Twin 400 lubeless slitter-scorers; a Terminal 400 double downstacker; and E&L web guides for both the wet and dry end.
All of the systems are controlled by Fosber’s Syncro Control, which also does the process control for the line and is tied into the Kiwiplan Corrugator Scheduling System.
This was not U.S. Corrugated’s first Fosber corrugator. The company also has a 98-inch machine that was installed at its Lancaster, Ohio, box plant in 2009. Fosber has introduced many new features since then.
“The corrugator in Santa Fe has a similar footprint but with many new features,” Lott says. “Fosber made some nice design improvements. They’ve listened to their customer’s feedback.”

Smooth Startup
Lott says the installation and startup of the corrugator went smoothly. Our first four units off the machine were good sellable product. Fosber did an excellent job and the staff was great to work with on this project.”He says he was impressed with the technical support. “I like the fact that Fosber has plenty of tech support, with many younger employees in the pipeline. They are definitely thinking about how to service their customers long into the future.” Manufacturing, sales and service are sourced from Fosber America’s Green Bay, Wis., facility. The company also has a spare parts depot on the East and West Coast. As an independent converter, when evaluating equipment, you’re looking at a 15-20-year commitment so you want to look at the parts, availability and service. Fosber is clearly number one in that area,” Jenick says. “They make good equipment and their service is stellar. I can’t speak highly enough about them.” Lott adds, “Any time we’ve had issues with the machine, which is going to happen with any piece of equipment, they are quick to react and their first concern is getting the machine up and running. They’re very supportive.”
The Santa Fe Springs plant hired the corrugator maintenance technician who was originally hired by Fosber to fulfill the two-year maintenance contract. When the contract expired, U.S. Corrugated brought the technician on board full-time.

Fully Automated
Most of the sheets off the corrugator are sent to the converting lines or shipped to U.S. Corrugated’s new sheet plant in Cerritos, Calif. A completely automated materials handling system from Automated Conveyor Systems, Inc. (ACS) facilitates high speed and fast turnaround of product. It has a two-stage transfer car system that can hold about 4.5 million sq ft of WIP. “That was a complicated system to install and we’re very happy with the finished product,” Lot says.
Robotic technology from Alliance Machine Systems International at the back of the flexos, combined with the ACS conveyorized WIP stations, reduced the amount of manpower needed to operate the plant. “Dennis has invested millions in this technology to minimize the amount of labor required to operate this latest generation facility. This allows us to be one of the lowest cost producers in the market. This is a new direction that he initiated five years ago,” Lott says. Every piece of equipment is the latest generation in technology that each vendor was offering.”
The plant is not at full capacity. “We think there’s a lot of opportunity in the e-commerce and ag markets. There’s also opportunity for growth in the accounts we currently service. We have started out at a slower pace as we learned the technology. This is quite different than running a conventional facility with older equipment. We didn’t want to disappoint our customers by over promising and under delivering.”
When asked what makes the Santa Fe Springs facility unique, Lott replies, “We have a very talented workforce. Even with state-of-the-art technology, if you don’t have good employees, you will not be successful in this competitive market. We have given our employees the tools to succeed, and they have given us a great result, hopefully for many years to come.”