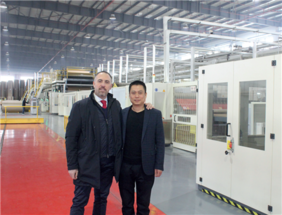 The new corrugator is the first of several new machinery investments that Taigu Qingfeng is planning, in order to expand corrugated output and in-house converting capacity over the next 12 months. “The reason we bought the Fosber machine is to enter the higher quality corrugated sheet market. Quality is very important now; previously high grammage paper was used, but now the trend is to use lighter weight papers; but customers still expect high performance sheets. We knew we needed a good corrugator to be able to run such a sheet,” said Zheng An Guo, General Manager of Shanghai Taigu Qingfeng Industry Co Ltd. Taigu commissioned its new Fosber S/Line in June 2017. The machine was supplied from Italy, while the splicer was supplied by Fosber Asia’s Foshan plant in Guangdong, South China. Designed to run at a maximum of 350m per min, the 2.5m Fosber S/Line is equipped with a double level dry-end, rather than a single level dry-end which is more common in China. “The main reason we choose the double level dry-end was for the higher production volume,”Zheng explained. “Based on our experience so far, we have had a 25% production increase with the double level dry-end compared to a single level. It means we can reduce our paper roll storage. Our sheet quality has increased and paper waste has reduced, which are all cost savings for us,”continued Zheng.

Taigu is currently operating one and a half shifts per day at its new plant. Daily production is 400,000 sqm at present, equivalent to 11 million sqm monthly, as the plant operates 25 days each month. “We are very satisfied with our Fosber S Line. It’s reliable and consistent. It has helped a lot with our sheet quality and its efficiency is a great deal higher than local machines. As a result, we have reduced production costs and increased our competitiveness in the market. Also, less manpower is needed,” stated Zheng. “We have been running our S/Line for six months now. We are still at learning a great deal about it, so we should be able to reduce our running costs even more in the coming months.”

New plant
Established in 2003, privately owned Taigu had been running a Chinese manufactured 2.0m corrugator, which following an upgrade, was able to run at about 200m per min. While retaining its original factory to produce single face, the company opened its new factory in Feng Jing Industrial Park in Shanghai’s Jinshan district to expand production, Zheng explained; after some refurbishment, they moved the original corrugator to the new facility in October to produce short orders, while the focus for the Fosber S/Line is for the longer production runs. With the two corrugators, production is around 16 million sqm per month; this is almost three times the previous 5.8 million sqm monthly output at the original plant. Taigu’s new plant includes a 12,000 sqm covered factory area on a 59 acre site. The factory consists of two buildings: one for corrugating, the other containing office space and the converting hall.

“We opened our new plant to increase our production capacity and meet market requirements for higher quality board and larger output,” Zheng said. “We chose this site as our customers are all nearby; it’s convenient for transport as we are on the Shanghai-Hangzhou highway and near the Shanghai-Suzhou highway.” Taigu has installed two locally supplied flexo rotary die-cutters in the new plant. Shanghai Ding Rong has supplied a 4-colour flexo rotary die-cutter which is being used for high volume orders while Zheng Li of Hebei has supplied a 2-colour model that is used for short orders.

Expanded portfolio
Sheet production on the new corrugator is currently divided equally between singlewall and doublewall board. However, the production ratio soon will change to 60% doublewall and 40% singlewall, Zheng explained, to maximise use of the new S/Line and because doublewall board is more profitable. Triple wall board is a new product for Taigu and one the company is looking to develop in future. “We started producing triplewall sheets on our old machine in October; it’s a request from a customer,” Zheng said. “Triplewall is only 5% of the old machine’s output now, but we will increase it to 30% over the coming months. We are looking to target customers for triple-wall – it’s more for auto parts and some heavy machinery parts.”

Meanwhile, Taigu’s increased sheet production capacity has encouraged the company to expand its geographical sales coverage and supply customers in new areas. Most of the company’s customers are located within a 70km radius of the new plant. The sales team currently is working on expanding the supply radius to 100km. “The area where our plant is located is in the southwest of Shanghai. We have a variety of customers, making boxes for electronics factories, FMCG customers and courier boxes for online shopping,” Zheng said. “We also sell sheet board to smaller sheet plants. Within a 100km radius of our factory, there are literally thousands of sheet plants of all sizes. In terms of competition from other board plants, we believe there are at least 50 corrugators running at factories within 100km radius.” Zheng commented that sheet plans in the area served by Taigu have been upgrading their equipment during the past two years to meeting changing market requirements for higher quality boxes. Demand for corrugated packaging is growing as manufacturing investment grows in many areas. “Consolidation has been going on in the region, especially during the past two years,” Zheng remarked. “A lot of new equipment have been installed in this area; companies are phasing out their old machines and replacing with newer, more sophisticated lines. The corrugated packaging market is still good; new equipment is being installed because of this market’s requirement for more efficient production lines.”

“We will produce about 6 to 7 million sqm of single face sheets per month, for sale to local sheet plants and printers who produce litho laminated packaging. Adding single face sheets means we can offer all types of corrugated – singlewall, doublewall, triplewall and single face.”

Expansion in converting
Meanwhile, Taigu is also planning to expand its converting operations, as it anticipated significant growth in box demand for the home delivery companies. “We are planning to install two flexo die-cutters in 2018. We are optimistic about the corrugated packaging market; we believe the market will grow, especially for home delivery and online shopping. The introduction of the Fosber S/Line means we can produce the best quality sheets, so the addition of new flexo converting lines to the factory this year will certainly help set us apart from our competitors.”

Customer service centre at Taigu
Fosber Asia has confirmed it will open its third customer service centre in China in mid-2018, using space provided by Shanghai Taigu Qingfeng Industry Co Ltd, in its new plant in Shanghai’s Jinshan district. Planned to cover Shanghai and East China, the new service centre will complement Fosber Asia’s other existing service centres in Tianjin, North China and in Foshan in Guangdong Province, South China (this is where Fosber Asia’s manufacturing plant and Asian regional headquarters also are located). Fosber Asia’s Shanghai and East Asia service centre will include office space and a parts storage warehouse to provide round the clock support to customers in East China. “We wanted to have a service centre in Shanghai and this is a good chance to showcase the S/Line corrugator as well at the same site,” said Marco Bertola, General Manager of Guangdong Fosber Intelligent Equipment Co Ltd. “Our target is to bring our customer-orientated Fosber philosophy to China. We believe the market here is ready for this after sales service philosophy as each corrugator has a long working life.” Taigu is happy to support the regional service centre for which the company is providing office and parts storage space. “Before we bought the S/Line, we thought about service and so we offered to help Fosber set up their Shanghai and East China service centre,” said Zheng An Guo, General Manager of Shanghai Taigu Qingfeng Industry Co Ltd. “It really is a win-win scenario for both companies and we are happy to be associated with Fosber as they grow in this territory.”